In the village of Kiriba, a week long church event was held. The program ran every day from the morning until the end of the afternoon. Every afternoon people would be sent home, while being encouraged to come back after dinner, because at 8pm, the Jesus Film – in two of the local languages, Kwaya and Jita – would be shown in the center of town.

And indeed, people came out in great numbers. Not only many of whom were involved in the church meeting came back to the village center after dinner. The showing of the Jesus Film also drew in other people, many of whom had never heard the Gospel told in their own language before. Some were completely new to the Gospel in any form. The little bars and restaurants with a tv where people were watching the World Cup soccer, normally packed with people, were much more empty, as the place to be was the Jesus film!

On the first night the Jesus Film was shown in Kwaya, on the second night in Jita, on the third night again in Kwaya, on the fourth night it was Jita’s turn again, and so on. Over the course of the week several hundreds of people attended this impromptu cinema. The closing night of the week a prayer meeting was held, where people were invited to give their life to Jesus. Around 100 people accepted Jesus as their Saviour! 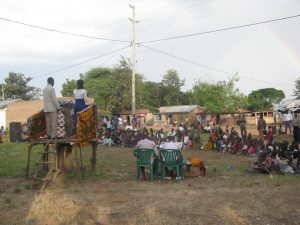 An impression of the church meeting (photo: MK). 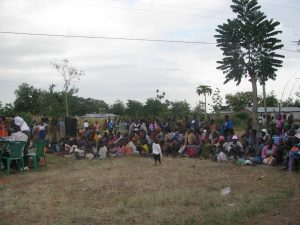